Christmas has come early at BAAM.  Our first ever cover girl, Luciana Parker, is appearing now on the cover of Essential Magazine (Dec. 2012).  Luciana has a lot to smile about as this Christmas is bathed in the glow of a happy marriage and family, which was far from the case 18 months ago. 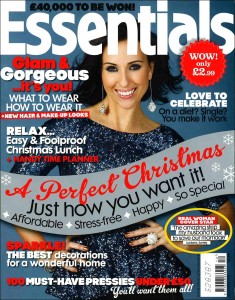 cribes how her marriage to her husband, Shaun Parker, was nearing its end unless he did something about the anger, which was tearing them apart.  Shaun cared enough about saving his marriage to take Luciana seriously.

He contacted Linda Bolland, from the British Association of Anger Management, Guildford, and booked onto her 3 day Beating Anger course.  Linda recalls that Shaun was very committed to doing something about his anger and recognised that that this was his responsibility alone.

She said “I was very impressed by Shaun’s realisation that he alone was capable of dealing with the anger that was spilling out into his relationship with Luciana and others.  His attitude had turned from blaming and shaming others to accepting responsibility for his own feelings and by the end of the weekend he was committed to dealing with the anger that consumed him by using all of the techniques he had learned”.

This had a tremendous knock-on effect for Luciana, who decided to do some work of her own. Bolland said that: “Luciana was so impressed by the turnaround in Shaun, that she decided to book on the course run by BAAM for those who are affected by another person’s anger- the Enough is Enough course.  Luciana learned that her anger was implosive, that is turned in on herself, and that by learning what her needs are and how to express them, she can stop her anger from causing harm primarily to herself, in the form of depression for example”.

BAAM therefore is very excited to have played such an important role in the lives of this family and feel that this is the best Christmas gift ever!

Linda also appreciates the timing of this ‘cover’ as it ties in very nicely with Anger Awareness Week (1-7 December) whereby anyone can download a free Keep Your Cool this Yule Kit from the beatinganger.com website.  While you’re there why not also find out “How Prickly are You?” by taking our quick anger test.